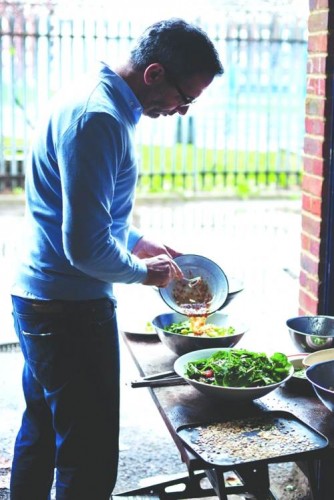 On a whirlwind North American tour to promote his newest Vegetarian cookbook, Plenty More (published by Appetite Random House,) Vancouver is Chef Yotam Ottolenghi’s only Canadian stop and there’s a lot of heavy breathing going on at every appearance– over vegetables!

“I grew up in a really diverse culture in Jerusalem with an immense tapestry of cuisines,” says the laid-back 44-year-old Israeli author and London-based restauranteur. “But one thing we all had in common was and still is, an inherent passion for great food and culinary creativity. We tend to eat seasonally and cook with whatever grows in the area and that’s an endless list of vegetables, fruits, nuts and dairy products.”

First working at the news desk at one of Israel’s daily newspapers and already holding an MA in comparative literature, he realized that “I wasn’t going to make my Dad happy and get my PhD in academia,” Ottolenghi moved to London in 1997 to train at Le Cordon Bleu. He met his business partner, Palestinian, Sami Tamimi, at the London bakery, Baker & Spice. Much to their mutual surprise, they discovered they not only shared the same birthplace but the same birthday.

After three years, Ottolenghi set up his first eponymous deli café in Notting Hill in 2002. He has since opened two others and a more upscale restaurant, Nopi, in Soho. While the shyer Tamimi runs the business and all the kitchens, the inventive Ottolenghi does the recipe testing, cookbook writing, a weekly column for The Guardian, and occasional appearances on BBC and Channel 4. 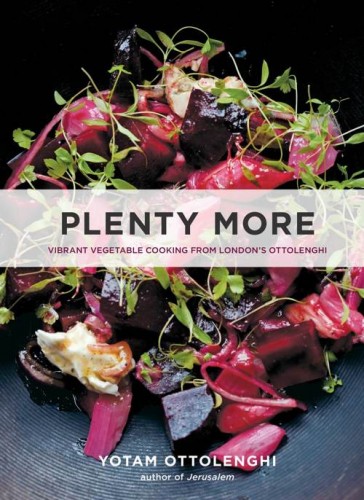 His two previous cookbooks – Plenty and Jerusalem, (the latter co-written with Tamimi in 2012 was a culinary ode to the flavours, smells, spices and vibrant cooking of their shared birthplace.) They started an international craze for Middle Eastern food and became New York Times bestsellers (over a million sold) with vegetarians and carnivores alike.

Kudos must also be given to photographer, Jonathan Lovekin whose artistic, sensuous food photos in all of Ottolenghi’s cookbooks will have you salivating to try each recipe.

If butternut squash with polenta, lemon and curry leaf rice or meringue roulade with rose petals and fresh raspberries, sends you into a gastronomic swoon or conversely, into a panic because you think you won’t be able to find the exotic ingredients, Ottolenghi says “Don’t stress in the kitchen!  I’m all for substituting ingredients and shortcuts. Too many people think a dinner party is a competition.”

Though thoroughly trained in the art of French cooking basics, he delights in big chunks of ingredients; handfuls of cilantro and mint, pungent spices like harissa, zatar, cumin plus lots of garlic and lemon juice- the complete antithesis of an exacting French cuisine. Anyone who has ever dined in the Middle East knows that portions are large- nouvelle cuisine would cause a riot there.

“Sometimes I think I’m a victim of my own success,” he laughs over coffee prior to a cooking demonstration. “If I publish something like pea soup for instance, I get all these emails saying ‘that can’t be Ottolenghi- it’s too boring!’” “I’m not on a mission to change people’s diets but I really believe that if people say ‘I hate brussel sprouts,’ for example, it’s because they’ve never had them cooked properly in the first place!”

The father of two-year-old son, Max, Ottolenghi wrote a very touching column in the Guardian in 2013 on how he longed to be a father and the obstacles he and his partner Karl overcame in order to do so. “I was a workaholic before Max was born,” he admits. “Now I work about 7 hours a day and come home. It’s so much more enjoyable now.” 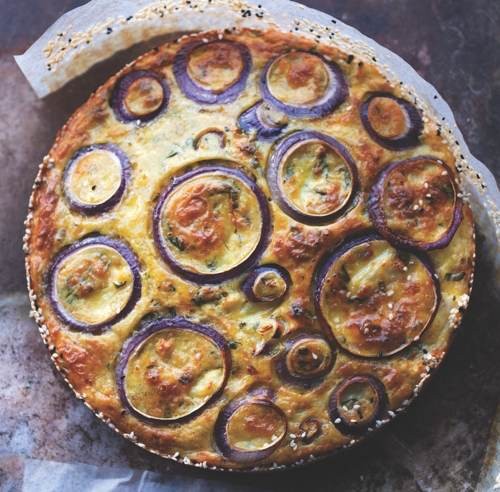 Q & A WITH CHEF YOTAM OTTOLENGHI

What kind of Celebrity Chef are you to work with in the kitchen?

Oh, don’t call me that! I really try not to indulge in all of that hype. It’s just not my way of life. I work with a team and have two assistants now when I do recipe testing. And I’m too nice in the kitchen – I’m too soft. Sami’s much tougher than me.

Now that you’re a parent, how do you get your son to eat vegetables?

Well, actually he’s very funny about it because unlike most kids, he only eats green vegetables and leaves the red. Max also likes to rearrange food on his plate keeping pasta separate from the sauce and will only eat one food type at a time.

What are some of your favourite foods to eat and cook with?

I just love maple syrup – it’s the equivalent of what honey is in the Middle East and I try to use it a lot. I love eating mejadra – it’s the ultimate comfort food.

How often do you go back to Israel? Do you cook for your parents when you do?

I try to get back as often as possible. It’s really nostalgic for me. The intensity of flavours and the food scene in general is really creative. When I go home I’m like every other Israeli and want home cooking. My Dad is Italian and my Mom is German and they are both excellent cooks. In fact it was my Mom who gave me her recipe for Malaysian Curry!