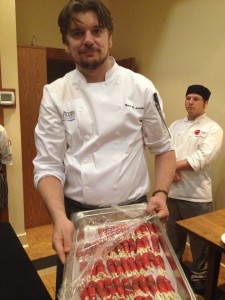 Best quips from a CCC Chef-
“ We were supposed to use wine? ” deadpans Toronto Chef Marc St. Jacques, Auberge du Pommier, to a bewildered guest tasting his plating, when asked if he knew the mystery wine at Friday night’s Mystery Wine & Food Pairing. (He must have guessed right (Norman Hardie 2010 Pinot Noir, Prince Edward County, Ontario,) since he’s the new 2013 CCC Gold Champion) 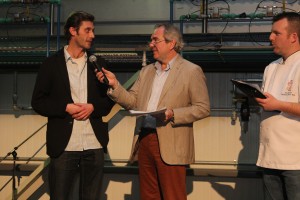 Did you know…. Ottawa’s fraternity of 20 chefs pitched in to keep Oz Café open & running for four nights while Chef Stunt competed in Kelowna? A tradition started last year for Atelier, when Chef Lepine competed. 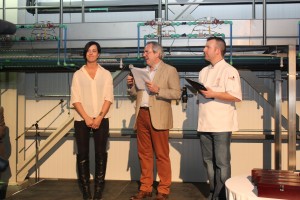 Most Frugal Chef –
People’s Choice Award -Winner, Chef Eden Hrabec, Crazyweed Kitchen, Canmore- the only Chef to return money -$150. from the $500. budget allotted by judges for food shopping for 400 plates.

Most Original Palate Cleanser and Expensive Wine Ingredient–
“Yellow Snow” (not the pooch kind) created by former CCC winner, Chef Marc Lepine, for his phenomenal 7-course banquet at the GMP Big White Adventure Trip Kelowna, this year. “Each guest was given a syringe of pineapple syrup to squirt on their sorbet of coconut and lime granita. Then I made a quince dessert with a jelly using 2008 Chateau d’Yquem from France ($1000. a bottle) the most expensive dessert wine in the world! “

Most acerbic wit by a Culinary Referee-
“Chefs must be subjected to pat downs and surrender all cell phones before entering the Black Box Competition. Open your knife kits – no saffron or extra ingredients allowed… Chef Filatow, surrender your electric hand mixer! “ Vancouver’s Andrew Morrison, giving the play by play at the Black Box Competition, Okanagan College, Saturday morning. However, Morrison did allow Chef Hrabec to keep her magic unicorn figurine in the kitchen while she competed. 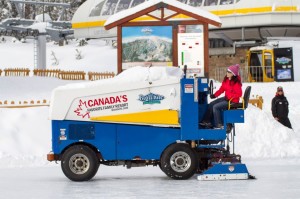 Most Innovative Career Change- Jamie Salé, Olympic Gold Medalist, Pairs Figure Skating-
The five-foot-one gamine, driving the Zamboni to clear the ice rink for her husband, former NHL hockey player, Craig Simpson to play shinny with the guys, at GMP’s Big White Adventure Trip, Kelowna.
“ I also went skiing and did some skating but I’m 4 months pregnant with my 2nd so couldn’t do too much! “

Best Fashion Plate –
Chef Eden Hrabec for her chef’s jacket that read ‘Calgary’ on the back which she crossed out with black magic marker and wrote hometown, ‘Canmore’ underneath for the Black Box Competition. You go girl!

Best Mom at the CCC Competition (besides Jamie Salé)-
The delightful Jan Hrabec, proud Mom of Eden and also a finalist herself at the 2010 CCC Regional Competition in Vancouver where Eden was her sous chef! “ We fight and argue a lot when we work together at Crazyweed Kitchen but even though we are polar opposites (Eden is so strong and organized- I’m really laid back.) I think that’s why we work so well together.”

Most Embarrassing Moment-
ME – trying to squeeze my size 8.5 feet into Jamie Salé’s autographed size 5 figure skates at the Silent Auction Table, Grand Finale Saturday night. (Well, do you know any woman who would buy shoes without trying them on first?)

Biggest Disappointment of the CCC Weekend-
Having to cook dinner in my own kitchen the next day. Doggie bags next year, please.

Finally, kudos to the amazing event organizers and all the extraordinary volunteers! L.G.