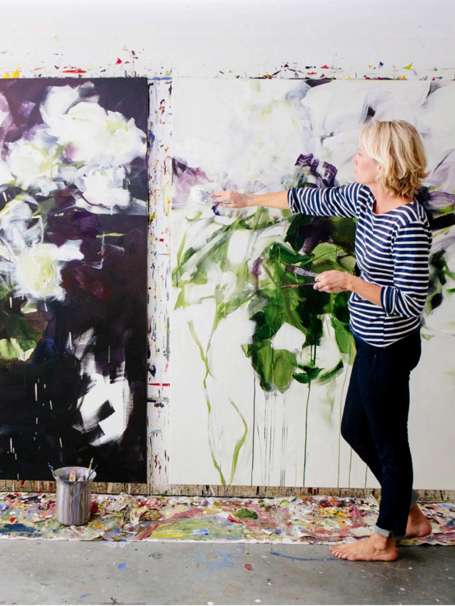 A tumultuous gale of purples, indigo and magenta, assault all the senses and pulls you in like an overwhelming theatrical set design. The floor to ceiling textured oil impasto on canvas is anything but a placid ‘Secret Garden.’ Its key (in the guise of a paintbrush,) is the unfurling and growth of abstract floral painter Bobbie Burgers’ inner self: the next stage of her 20- year love affair with interpreting the language of flowers.

“It’s been a slow evolution and an emotional struggle planting these ‘seeds of rebellion’, ” admits Burgers – also the title of her recent exhibition at Bau-Xi Gallery in Toronto and opening June 4th at San Francisco’s Caldwell Snyder Gallery.  At 42 and the mother of four, she’s as refreshingly open as her modern glass home and studio in West Vancouver, designed by her brother, architect Cedric Burgers.

The Vancouver-born, six -foot tall blonde, the daughter of Dutch architect, Robert Burgers and interior designer, Marieke, went off to Paris to study for a year and came back to attend Emily Carr as a young woman. Though much affected by the Dutch and Belgian masters’ realist interpretation of flowers and light, Burgers found them confining and was naturally attracted to large canvases and the physical freedom they demand from the body necessary to work on them.

“Traditionally, flowers were always perceived as feminine and tame reflecting characteristics like the home and servitude- very civilized to my mind,” explains Burgers. “But now that women have power, I want to go rogue – show power and strength in my flowers. Just think of the resilience it takes for a tulip bulb to push out through the earth.” The analogy to human birth is not lost on Burgers. In fact, contrary to North America’s critical take on aging, Burgers finds beauty in every stage of the life cycle. Naked stamens, all that’s left of tulip heads barely clinging to stems in a vase in her studio are deliberately left beside another vessel of towering forsythia; the dried pastel petals that linger on the table are used as colour samples when her six –year- son paints with her. 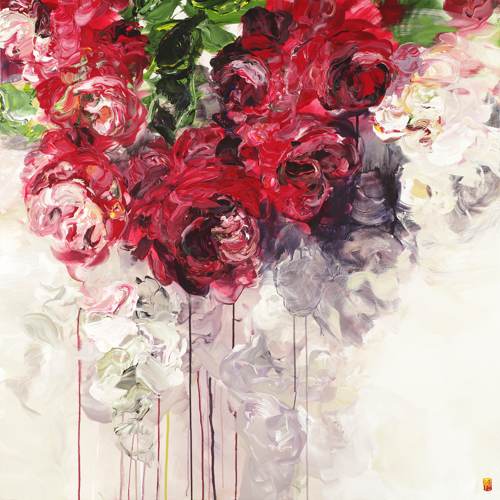 Like painter, Georgia O’Keefe, Burgers tries not to be swayed by shifting art trends and stays true to her own vision of flowers in the abstract. “I work with big brushes now and quickly. If I want the spontaneity to show, I have to be fast. I can have three large canvases up at the same time. I’ll get a rough idea- then let a week, a month go by and then attack it. If they look laboured over, I throw them out. Five years ago what would have taken me 30 little brushstrokes to accomplish, I do in one flourish,” she confides.

Her first solo show in 1999 at the Diane Ferris Gallery sold-out. The next year, Burgers moved to Bau-Xi – the oldest contemporary art gallery in Vancouver with sister gallery in Toronto, prolifically selling out four to five solo shows a year. That included last year’s ‘Lure of Magical Thinking’ at which she debuted her foray into mixed media and bronze sculpture. 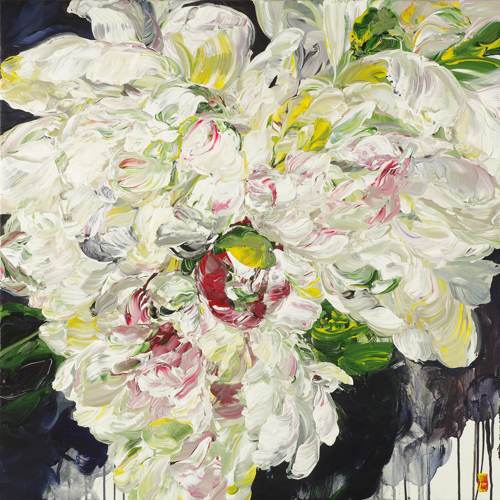 “I don’t fit into just one genre,” expresses Burgers, who is collaborating on a massive ceramic wall sculpture with her husband, furniture–maker, Billy Wishloff.  The cascade of ceramic indigo anemones growing, tumbling and in decay, is a commission from the Quebec City-based apparel department store, Simons, who are opening this fall in Park Royal, West Vancouver. “They’re each very heavy,” says Burgers of the 50 multi -petaled flowers and Billy has to mount each of them on steel posts to get a freer, rougher look- almost like mounted butterflies. ”

Usually dressed in a neutral palette of striped top (“I just love stripes and my friends tease me about that,”) comfortable pants or jeans and often bare feet, “ I feel like one of those child-actors who realizes they’ve grown-up and needs to evolve. My learning curve is way out there,” Burgers laughs with a very wide sweep of her arm.”