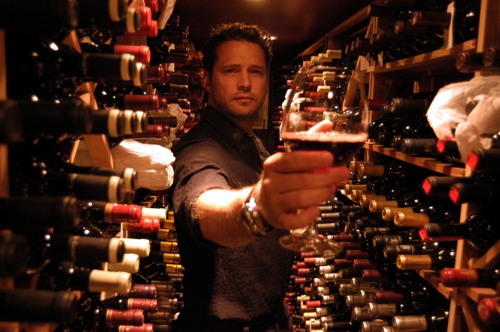 Longevity for many hot young stars is somewhat of an anomaly in Hollywood unless they parlay their talents in many different directions. Vancouver-born Jason Priestley, who played teen heartthrob Brandon Walsh, in the ‘90s hit TV series Beverly Hills 90210, recognized that early, directing 19 episodes in the show’s 10-season run. The handsome 44-year -old Priestley recently wrapped principal photography on his feature film directorial debut, Cas & Dylan starring Richard Dreyfuss and Tatiana Maslany and finished his 4th season for Call Me Fitz for HBO Canada in which he stars, produces and directs.

He also takes wine very seriously – more than just a celebrity endorsement in name only. Priestley is one of five partners invested in the South Okanagan’s Black Hills Estate Winery; co-host with Vancouver pal and media personality, Terry David Mulligan of a syndicated celebrity wine series, Hollywood & Vines and oenophile extraordinaire with a personal wine cellar of over 5,000 bottles. 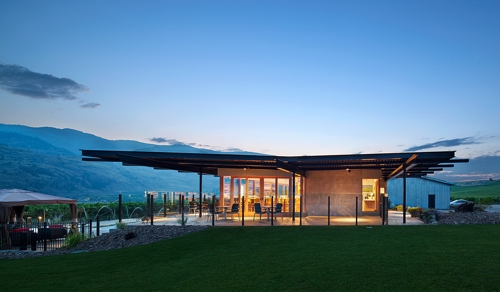 “ Black Hills Estate Winery has seen tremendous growth since upgrading facilities in 2007 and building the state-of –the- art crush pad,” says Priestley, by phone from Toronto where he is directing Spun Out with Dave Foley and reunion of Canadian comedy troupe, Kids In The Hall for CTV. “We’ve sold out of our current 2011 vintage of Note Bene, a Bordeaux-style blend of Cabernet Sauvignon, Merlot and Cabernet Franc.”

“I’ve been collecting wines for over 20 years and I’m passionate about it, ” enthuses Priestley. “ For me to be part of a winery in my home province was incredible. The Okanagan is such a spectacular wine region. I try to visit the winery at least once a year. For several years the winery hosted a celebrity wine auction and it was a great way to talk about the valley, the region and our winery and we raised a lot of money for charities in the South Okanagan.”
Calgary-born, Glenn Fawcett, CEO of Black Hills Estate Winery in Oliver (and self-proclaimed “Wine Evangelist, ”) is particularly proud of the cutting edge design of the winery by renowned Canadian architect, Nick Bevanda encircling a 3,000 square -foot tasting area and wine shop know as The Wine Experience Centre. “Our inspiration for the design came from the crush pad in the heart of our vineyard and closest possible proximity to our grapes, explains Fawcett. In 2008 the winery received the Lieutenant Governor’s Award for Architectural Excellence. We are the only winery in Western Canada to have ever received this award.”
Wines from Black Hills Estate Winery were selected to be served on the Alberta Train and in the Alberta House during the 2010 Winter Olympics in Vancouver.
Located in Canada’s only desert region, the 27-acre vineyard situated between Oliver and Osoyoos, is nestled in the sunburnt hills of the Black Sage Bench where the arid desert soil, long hot days and cool mountain air at night, produces intensely flavourful grapes. “Although Note Bene (Latin for ‘take note’) is our flagship red wine (plantings include Cabernet Sauvignon, Merlot and Cabernet; Franc) we also grow a deep, luscious Carmenare grape and aromatic Sauvignon and Semillon grapes in our vineyard; the latter are used to create our Alibi white blend,” explains Fawcett.
The winery will host their final Alfresco Dinner September 12th with their wines and delicious food pairings by Flambé Catering, Kaleden.
Then on October 5th, Black Hills Estate Winery celebrates the fall crush with their 5th annual Fall Harvest Party catered by Dolci Deli and Catering, Osoyoos. The themed evening will include live music, entertainment, prizes and to be sure, lots of wine tasting in the Wine Experience Centre!