BEHIND THE SCENES WITH ALLY MCBEAL SET DESIGNER, PETER POLITANOFF

Ever wonder at one time or another about how sets from your favourite TV shows can look so well pulled together and how can we ever attain a similar look in our own home? We got the scoop on Ally McBeal, one of television’s most obsessively watched shows in which everything from skirt lengths to musical vignettes have ignited new trends. Style At Home talked to Peter Politanoff, set designer for the show who reveals some behind the scenes tips and tricks of the trade: 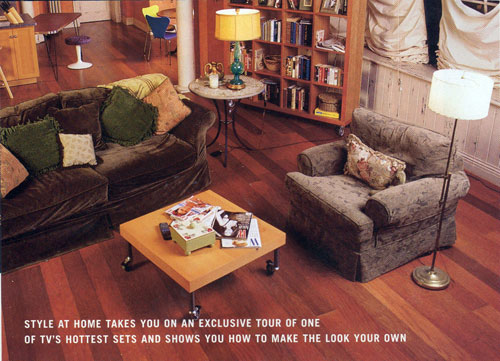 Politanoff thinks “subtlety” when it comes to design. “We are starting the third season of the show and I wanted furnishings on set not to detract from the quirkiness of the characters. I also envisioned Ally’s renovated townhouse/loft to be more aspirational in quality to young professionals – Ally is a lawyer making good money, but like your magazine readers, they probably don’t have it all. When I did Miami Vice in the ’80s no one could afford the characters’ lifestyle in real life!”

With the storyline in Boston but shot for Fox Studios in California, Politanoff and his staff searched for six weeks to pull Ally’s loft look together by scouring flea markets and thrift shops for one of a kind “funky” pieces then mixing them with a few choice classics: The faux Louis XVI chandelier in Ally’s dining room he sprayed lime green (crystals and all!) combining it with the modern blue and lime Arnie Jacobson chairs around the dining room table.

An east coast feel is also attained by expansive windows with curtain treatments that masquerade fake Boston street backings outside! 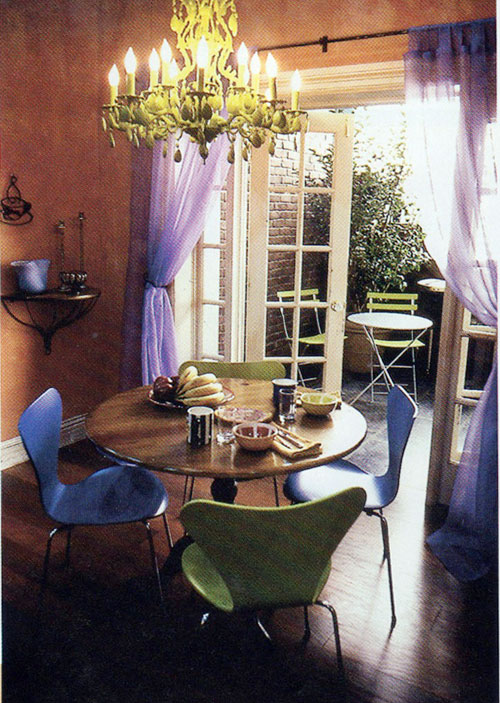 Politanoff attains a fluidity from room to room by integrating a vivid colour palette on the walls from blueberry and lavender to subtle earth tones , picking up these colours in furniture, drapes and accessories in other rooms. The entire open concept living room is painted in a warm terra – cotta, set-off by beautiful pine floors berefót of rugs to allow easy camera movement but also capturing the New England flavour of exposed floorboards.

“I also change accessories seasonally,” explains Politanoff, “Something we all can do in our own homes very reasonably, refreshing the loft with candles, picture frames and baskets.”

David E. Kelly the creator and producer of Ally McBeal has also given Politanoff more latitude in the last few seasons to use interesting architectural elements like the carved mantle above the working fireplace; Doric columns and wrought-iron spiral staircase leading to a second floor library that creates a more convincing loft space while adding character.

So far, Ally McBeal star Calista Flockhart has not added any personal touches to the set. However, Politanoff, tongue firmly-in-cheek truly enjoys injecting some of her character’s kooky take on life into his designs. A reproduction of an old clock face has no hands symbolizing Ally’s biological clock ticking and heart motifs throughout the loft from metal grillwork to Kosta Boda bowls and paper weights capture Ally’s character as the “hopeless romantic”.

Will the third season bring any changes in design to incorporate the tastes of a steady man in Ally’s life?

Laughs Politanoff ,”Part of the surprise for us in working on the show is that we only get scripts about a week ahead. That’s a challenge for a set designer but David likes to keep us all guessing- not just the audience!”