Andy & TJ : A Decade of Humour and Devotion To Community 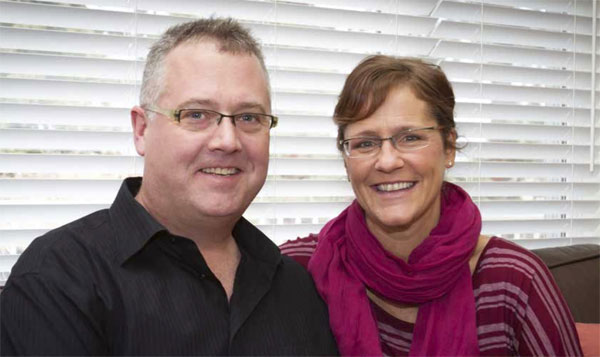 Lucille Ball and Desi Arnez had it. So did Sonny and Cher (albeit in more outlandish outfits.) Tina Fey and Steve Carell, Date Night’s fictitious couple, used it to survive the banality of everyday life.

The it factor is that rare combination of humour and intangible chemistry in relating to an audience. After a decade of hosting Kelown’a longest running morning show together at Astral Media’s 101.5 EZ Rock, husband and wife team, Andy & Tj have it in spades!

At home, Tj is rummaging through a large trifle bowl of memories- hundreds of Sharpie labeled wine corks until she finds the champagne cork from Summerhill Winery where the couple were married 10 years ago and recently celebrated their anniversary. “There’s no romance in screw-top wine bottles,” Andy deadpans. 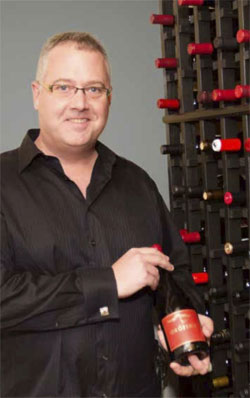 “Andy was actually my boss in 2002, the program director at the station and we were married to other people, “ Tj confides. “I auditioned with three guys, including Andy for the morning show. We were friends first and saw each other at ungodly early hours through the good, the bad and the ugly. After our divorces, I thought in one defining moment, ‘this is the man I need in my life’.”

“Oh I was just seduced, “ quips Andy who is also EZ-Rock’s brand manager. “She’s the half-full glass, free spirit kind of person and I’m the curmudgeonly half- empty one.”

It’s this easy-going, spontaneous banter between the two and their innate ability to put the listener at ease with no-holds-barred zingers on almost any subject, that makes James and (Tamara) Joel (YES, they do have last names!), beloved ‘friends’ to listeners throughout the Okanagan Valley.

“Andy & Tj in the Morning is just a continuation of our real life,” explains Tj. That runs the gamut from on-air discussions of their 14-year old dog Winnie’s health problems (named after Winnipeg where Andy was HOT 103’s first morning show host.) She now lounges on the couple’s Oscar version of ‘the red carpet’ – rolled out from the living room to the kitchen in their contemporary home, to cushion their “princess” with hip problems. Or relating the raucous antics of their three kids, Kensington, 13, and the twins, “fiery redheads,” Adam and Brady, 10, whom Andy is crazy about and has step-parented since they were toddlers. “Discipline,” explains Andy, “is easy.” “ I just threaten to embarrass them on air- and I do!” To fall-out from divorce : “Hey they’re good kids and quite used to going back and forth to two homes like lots of families,” says Tj matter- of -factly. Checking their non-discernable egos at the studio door, almost no subject is too personal to share with listeners.

“We’ve never had a knock-down fight on air,” admits Tj “We’re just too professional for that but our close friends can tell if we may have had a tiff. Hey, we’re normal people. We try to give each other grace and move on from there.”

Most of the time it’s Freudian slips and off-the-cuff humour that has the couple rolling on the floor. “I’m in charge of the mic controls,” relates Tj and we had just come out of a commercial break advertising a restaurant. I turned up the sound too soon and all of a sudden I hear Andy give this huge belch on air- it was hilarious!”

In the 10 years that Andy and Tj have hosted the morning show one of the most memorable yet terrifying broadcasts was during the 2003 Okanagan firestorm that ravaged almost 62,000 acres and destroyed 239 homes. “We worked in split-shifts 24/7 holed-up at the station,” relates Andy. “One of the transmitters burnt up and I think we were one of the only radio stations left on-air trying to stay current and relay emergency services .”

Their indomitable advocacy for charitable causes in the community from The Canadian Cancer Society’s Daffodil Ball; Central Okanagan Hospice Swinging with the Stars; Kelowna SPCA; Central Okanagan United Way; KGH Foundation; BC Childrens’ Hospital and so many more, makes you wonder if the dynamic couple ever sleeps! 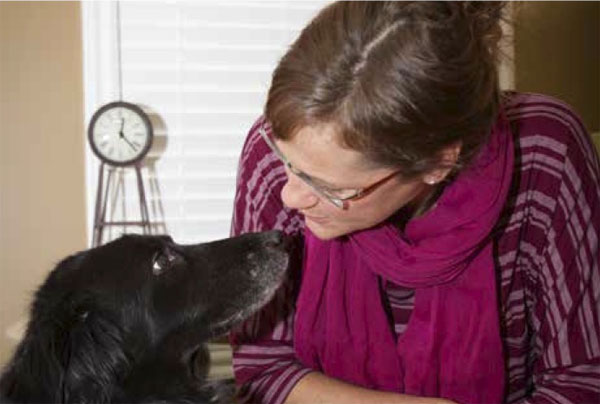 In 2005, Andy & Tj travelled to Reykjavik, Iceland to compete in the International Team Diabetes Marathon with 30 other runners from the Okanagan who had pledged $4,000. each to the Canadian Diabetes Association. “We have a 3rd person on the show now,” Tj laughs while glancing suspiciously at Andy’s stomach. “We need to get back to running together.”

Cooking and spending time with their children is a passion for both of them and Andy especially likes preparing meals with Kensi. “We tell her she should have her own show – Cajun Cooking With Kensi because she blackens everything,” jokes Andy, who recently completed his I.S.G. Level II Sommelier training at Mission Hill Winery.

The secret to their decade of success? “We never take our audience for granted,” says Tj.

Alluding to the zany antics of the popular ’80’s TV show, Andy has the last word: “Everyday for us is The Gong Show!”

Diane Nelson Brings the Art of Decorative Concrete To Life 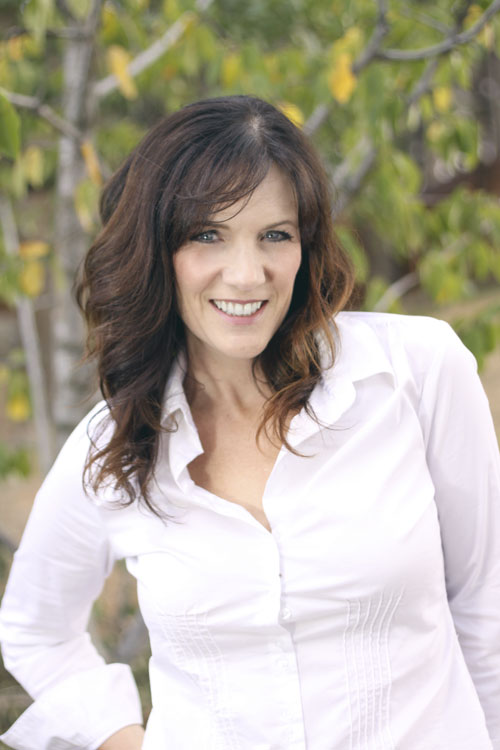 Roy Rogers horse, Trigger left a hoof print. Harry Potter star, Daniel Radcliffe left an imprint of his eyeglasses and B.C.’s Sarah McLachlan, a star surrounded by maple leaves. From the iconic celebrity signatures in Hollywood’s former Grauman’s Chinese Theatre’s sidewalks to Canada’s Walk of Fame, concrete has left a legacy of many indelible impressions. Diane Nelson of Brandon- Johnson Art and Design has taken the humble medium and raised the bar to include sculptural and decorative custom finishes and décor.

You could say it was King Kong and Spiderman scaling the Grand 10 Cinema, Kelowna that lead to Nelson’s discovery that decorative concrete was her métier . Working with a team from Global Surface Solutions, she was responsible for sculpting the larger than life characters out of styrofoam, then started experimenting on her own with custom colouring , 3D texturing and finishes in concrete.

Integrating her multi-dimensional background in graphic, visual and interior design Nelson launched Brandon-Johnson Art and Design in 2009. Kelowna-born, Nelson works directly with clients and interior decorators. Whether onsite for weeks at a time, painstakingly pouring and sculpting concrete on a 30-foot fireplace surround or overseeing the installation of her hand-made tiles, it’s all a collaborative process. “I listen very closely to the needs of my clients, then interpret their ideas on my computer, researching and transferring stencil images onto thin concrete slabs- an interactive experience every step of the way.”

Like a scientist in her laboratory, (in this case converted from a 600-sq foot garage attached to her home,) Nelson is part magic conjurer, mixing her own myriad of paint colours, primers and sealers and part Rosie the Rivitor. An enormous horizontal table supported by a motorcycle hydrolic lift moves thin 8-foot panels of sculpted concrete to drying racks. Her tools of the trade range from elaborate construction sanders and chisels, to artist’s airbrushes, stucco trowels, sponges – even culinary cake decorating tools used to create her intricate embellishments. Asked about a huge 10-inch syringe she uses to measure and inject laytex polymer colour pigments she laughing recounts how a sales clerk at a medical supplier asked her if she owned horses!

Nelson’s charming main floor of her home is a perfect showroom for her broad range of work from concrete countertops and faux brick and mortar walls in the kitchen to intricately textured one-of-a-kind mounted art pieces that one is compelled to touch and she encourages clients to do so. Her hand-made French Provencial fleur de lis tiles look like antique finds from an architectural ruin. Each water -jet cut tile intricately fits together like a giant jigsaw puzzle. The burnt orange abstract wings of a monarch butterfly art piece over a fireplace surround, resemble textured shot velvet and it’s difficult to imagine such delicacy is sculpted with concrete. A sample board of embossed Japanese cherry blossoms for a wall treatment , looks like piped cake icing and feels like flocked wallpaper.

She is currently experimenting with image transfers of photographs onto concrete that creates amazing depth in portraiture and landscapes evoking a moody, almost spiritual calm. “It’s like silk-screening on concrete,” she explains. 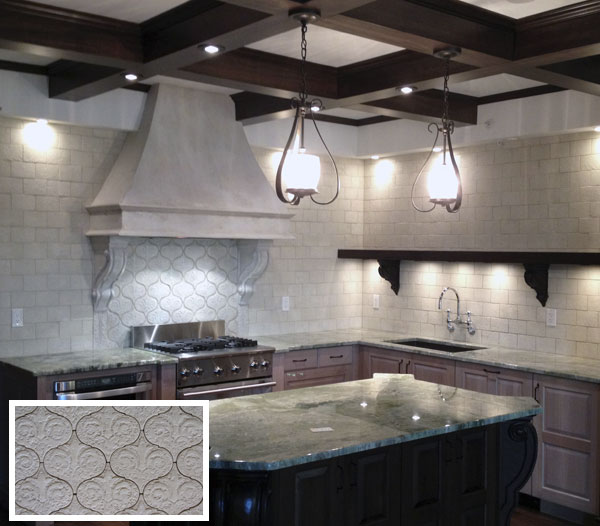 Commercial clients have gravitated to Nelson’s unique ability to capture the senses, then meld it with their own branding: a large concrete 3D painting of a water lily pond with a lone exquisite bloom, hung in the waiting room of The De Pieri Clinic, Kelowna, immediately inspires individual beauty, health and serenity. Her hip abstract illustration of a sexy hair-do on a large concrete mirror she created for Scruples Hair Design, incorporates the metallic silver striated texture of the concrete reception desk and suggests a ‘cool vibe’ to customers.

Nelson has also experimented with outdoor furniture and water features for the garden because concrete, when sealed, is the perfect foil for heat, rain and even snow. A coffee table with a concrete slab top and custom made stainless steel legs has a carved out centre cavity in which to hold candles or plants.

“ For me, “ confides Nelson, “working in such a creative medium allows me to bring artful living to every part of the home and workplace.”