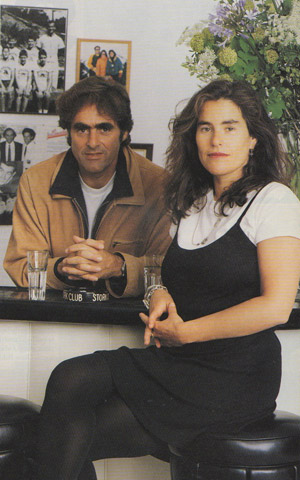 Standing on their sculpted rooftop terrace, perched like a tree house, high above towering oaks and cloistered maples, immediately re-affirms why architect, Diane Bald and ROOTS co-founder, Michael Budman savour this urban sanctuary: it embraces both a personal philosophy based upon the beauty of simplicity (less is more) and the shared principles of nature and modern design.

The white-fortress-like brick structure sequestered at the end of a mid-town alleyway, but condusive to trendy shopping and restaurants, always intrigued Michael Budman, who often passed by walking his dogs in a nearby park. The building was originally a plywood warehouse and marquetry workshop. It’s enormous proportions and central location held such strong appeal for the couple that they purchased a portion of it in the mid ‘80s, beginning a loft conversion that continued until they took over the entire building in 1986.

“We are not real traditional neighbourhood people,” laughs Diane Bald in mock understatement. “We bought it for the space, its incredible light and airiness and close proximity to the park. And, we renovated in just three months because our first baby was coming! “

They immediately ripped out what seemed like acres of drywall that had formed a myriad of internal walls, exposing the supporting structure of solid wooden beams and steel girders, leaving two vast open floors, each 2200 square feet. A striking open-light vaulted well on the upper level (later child-proofed with glass and a sleek metal grid ) was installed, incorporating 1930’s lighting fixtures over the entrée , originally found in the basement of one of the Roots’ stores. All the large original factory windows were retained.

Stepping down through the front door into the entrée, one feels a bit like Alice entering a ﬁsophisticated Wonderland of constantly evolving, open-living and entertainment areas designated only by the furniture or floor demarcations they inhabit at the time. And , so too, like Alice, one cannot help becoming ‘curiouser and curiouser!’
“We like to think of it as an urban playhouse,” says Canadian-born Bald, who is responsible for the design of all the ROOTS stores in North America as well as the burgeoning housewares line. “For me, there’s not a lot of architecture involved here – it’s more like a changeable set. I haven’t taken the building and twisted and turned it into something else. The main thing is it’s a very open plan because it suits our type of living.”

The stunningly simple design scheme that Bald devised for both levels is not bound by convention nor any one period in history. Instead, it reflects her inate ability to combine the incongruous, the chic, even the kitchy into a harmonious and distinctive style. This je ne sais quoi she reaıdily admits, was strongly influenced by both her and Budman’s close association with the legendary French designer, Andrée Putman, whose company, Écart International, was responsible for resurrecting and reproducing much of the famous modern classic furniture from the 1920s and ‘30s including Le Corbusier and Jean-Michel Frank. 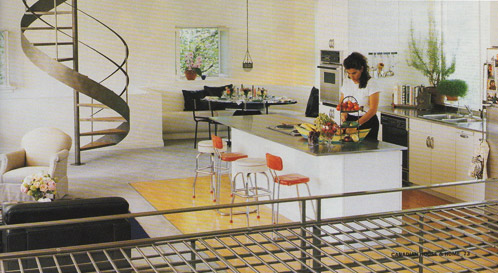 “She showed me the beauty of simplicity,” says Bald, “ juxtaposing different often natural materials such as woodgrains with metals, textured with shiny or mirrored surfaces.”

It was Budman who first made Putman’s acquaintance when he moved to Paris to set up a European base for ROOTS and launch Passion Magazine in the late ‘70s and early ‘80s. She helped him furnish his apartment with Écart pieces, many of which are still in his Toronto home. Bald joined Putman’s tiny entourage and later supervised some of her widely acclaimed work in the United States, including the Yves St. Laurent chain of stores and the conversion, by Studio 54’s Steve Rubell and Ian Schrager of a seedy downtown rooming house, into Morgans one of the most fashionable Art Deco-inspired hotels in New York.

What appears to be two distinct schools of thought, (Putman’s modernist influence and ROOTS back to nature philosophy,) actually share common principles that Bald and Budman have incorporated into the overall design of their home as well as their business: uncomplicated clean lines, devoid of extraneous clutter; natural fabrics and a simple colour palette based on the environment; classic, timeless beauty of modern mixed with hand-made wood pieces that, according to Bald, “will never go out of style.”

The functional ground level comprises a dressing room, utility space and small bathroom at one end . A remarkable children’s playroom in which Bald has designed a castle, originally as a guest bedroom, was constructed out of honey-coloured school-grade maple, its verrucated ramparts reaching close to ten feet. Wall to wall maple storage cabinets with built-in art easels provide easy child-level access to playthings and display Budman’s vintage toy guitar and hockey collectables.

“I like to have a house that everyone can live in and where our two kids and their friends can have a really good time,“ says Bald, “and that includes rollerblading and riding their bikes in this area.”

The inexpensive linoleum flooring is therefore a necessity but in true Bald fashion, practicality never completely bows to conformity. A colourful cut-out hockey rink motif set into the linoleum has seen many a game between father and son.

On the ajacent side of the entrée, a music and home entertainment area is defined by Bald’s beloved grand piano, a geometric black and white Eileen Gray rug , surrounded by an informal grouping of Mallet Stevens’ (a well-known set designer of the ‘30s), aqua-piped steel metal chairs and black Jean- Michel Frank sofa. Vintage ashtrays made from hockey sticks and used as end tables, reflect Budman’s enduring passion for the sport. Perhaps in a mood of mischievous whimsicality or just because she doesn’t like to take herself too seriously, Bald inlaid the linoleum under the Écart rug with cartoon-like 1950’s cutouts of a rabbit-eared TV set, martini glasses and a set of musical notes. Inverted garden lanterns and ‘30s glass fixtures suspended from the ceiling, provide subdued lighting at night.

“There’s no separation between my work and personal life. We love the outdoors and entertaining at home,” says Budman, who also makes time to relax with his family at a rustic weekend retreat Bald designed, in Algonquin Park. The ROOTS line of clothes has been worn or endorsed by many celebrities and sports figures, including Doug Gilmour, David Bowie, Michael J. Fox, Robbie Roberston (for whom Bald designed apparel for his world tour, ) Janet Jackson , Paul McCartney and Keith Richards, and combining business with pleasure, many have also enjoyed the hospitality of the couple’s home. Last year Disney released Indian Summer, a film starring Alan Arkin based on the camping experiences of the two co-creaters of ROOTS.

Budman is also very active in environmental causes and to celebrate ROOTS 20th Anniversary he and partner, Don Green with close friends, actors Donna and Dan Aykroyd, helped raise over $30,000 for the David Suzuki Foundation. Continues Budman, “I love the cocktail hour and setting up this area as a piano bar in winter or doing buffets in various parts of the house or theme parties on the deck. We like our guests to be able to feel free to wander throughout the house.”

Imagine then, good friends, Angelica Houston or Wayne and Janet Gretzky climbing the geometric staircase, designed like a jagged piece of a child’s puzzle embedded with recessed truck lights, to the sophisticated second tier. A Max Ernst block print, a wedding present to the couple from Andree Putman and a sepia photograph of Chief Hector Assiniboin by E. P. Curtis are the only pieces of hung artwork to be found upstairs, because in Bald’s words “I like to use things. I don’t collect things I can’t touch.”

Awash in natural light reflected off vanilla walls and enormous recessed windows from which potted orchids seem to proliferate, the second floor’s stark, simple open layout, and neutral palette of grey, black and taupe, has the feel of a modern treehouse overlooking the city. To add texture to the window treatments, Bald sometimes suspends old-fashioned thick Venetian blinds across the expanse.

The open kitchen’s stainless steel countertops and appliances, crisp, clean lines and lacquered cabinetry reveal, were influenced by Bald’s work on the Morgans Hotel. The kitchen area is also an impartial backdrop for many of Bald’s unusual collections and innovative uses for them. Soaring beakers, designed originally to weigh fish, make handy vases for tall flowers and a brightly painted vintage wooden toy canoe is an inviting fruit bowl.

Both Bald and Budman are fascinated by unconventional objects that also illuminate or are made from incongruous elements. The entirely Écart-furnished living room area, surrounded by several Perzel tables from Paris, their pebbly glass bottoms lit from within, cast an eerie aqua glow. One of Budman’s most favourite objects, is an extraordinary clock, designed in 1935 and made entirely from Ford automobile components A hospital rolling table made of nickel and thick glass and designed by Andree Putman for Budman’s Paris apartment, is often used as a buffet table or for intimate dining.

The white master bedroom is separated from the children’s rooms by sliding shoji screens made from translucent glass panels supported by slender wooden fr“ames, a sturdier version of the traditional delicate Japanese rice paper. Two overstuffed armchairs and matching tufted ottoman, are made from grey Roots sweatshirt fabric piped in natural canvas. The mood is that of tranquil repose.

A corridor of built -in wall to wall storage cupboards made of practical laminated particle board separates the master bedroom, from the bathroom. It is so unusual that it is often used by guests, but with one caveat, Bald admits with a smile – “It’s very open. When we have people over they hesitate to say ‘is that the only bathroom?’ We always answer, we won’t disturb you and you’ll get used to it!”

Built on a raised platform, with no doors, the black and white Venetian glass-tiled bathroom is pure Putman, inspired by her designs for Morgans Hotel. “It was a very difficult job working with the tiles,” admits Bald. “They are all paper-backed and so I had to work backwards to lay out the design. I cut out all of the patâterns onto the mosaics and masked them back so that they were still in 12” squares when the workman applied them.” Antique perfume bottles, like cut-glass jewels strung between silver Art Nouveau cachepots, add glints of colour to the tiled vanity.
Two years after the initial construction of the house, the couple added a roof-top terrace and a striking sandblasted metal and maple spiral staircase that gives acces to it. The effect is that of an ethereal stairway to heaven. “I wanted a free-floating look,” says Bald, “sort of a cross between those wrought-iron staircases in Montreal and that famous painting, Nude Descending the Staircase.”

There is a child-like urge to race up those stairs to the outdoor terrace, in this case, Swiss Family Robinson immediately springs to mind. Both Japanese and Jamaican inspired, the long narrow cedar entrance is like an imobile suspension bridgep leading to a landscaped, sunken deck with thatched grass dining area and a bamboo bar bought in L.A.

“You know,” says Bald, “Nature is a very big part of my life and Michael and I have always shared that connection. I’m very rustic but on the other hand, very urban… Toronto is a great city to be based in and I wanted to be in the heart of it and with this house – I can express both sides of me. It’s just a very comfortable space to live in.”