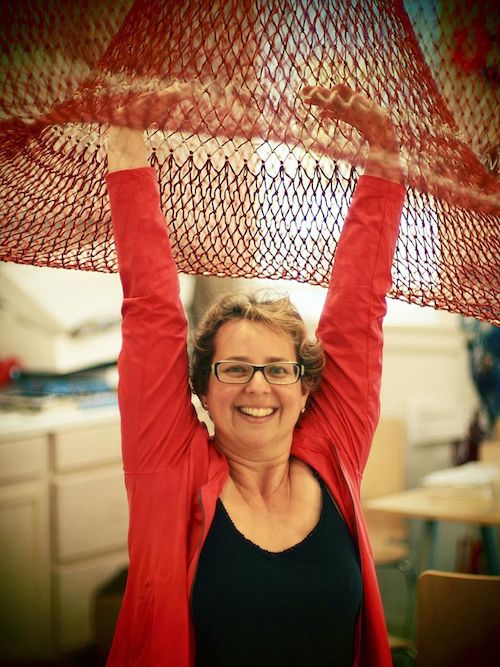 In daylight, the ephemeral webs of intricately patterned nets resemble a rogue sail of a mythic vessel; an exotic winged creature or a benign, tethered twister, all flirting with the wind, clouds and sky. By nightfall, it transforms into a phosphorescent alien life form: a pulsating jellyfish, snagged between ocean and city buildings, hypnotic, ghostly, organic.

To the eye of the beholder, Janet Echelman’s aerial sculptures are metaphors completely symbiotic with the environment. “I create soft, billowing sculptures that act as a counterpoint to hard edge cities and buildings, and in doing so, my aim is to create oases of art in urban centres around the world,” she explains.

Her eureka moment came after college when she was on a Fulbright Lectureship to teach painting throughout India. After her paints shipped to Mahabalipuram (a fishing village known for their sculptors) never arrived, serendipity stepped in to change her life. Walking along the beach, Echelman contemplated local fisherman casting their nets out to sea and wondered how they could be adapted to aerial sculpture. Working in collaboration with the fisherman, they hand -crocheted 1.5 million knots together, hoisting the nets on poles into the wind.

Echelman’s sculptures keep evolving and reflect years of research and collaboration with aeronautical and mechanical engineers; consultation with NASA on spacesuit fabrication used in her netting; architects, lighting and landscape designers – even a roller coaster manufacturer – then finally with the development of a specialized Autodesk 3D programme to custom design her aerial sculptures, they are brought to life.

Some are permanent outdoor public art like Water Sky Garden installed over the plaza at the Richmond Olympic Oval for the 2010 Winter Games while others are transient, moving from city to city installed as commissions throughout the world. “Though I work on several projects at a time, I can only live and breathe one,” admits the feisty Echelman. “They are all different and tremendously complicated.”

In celebration of TED Conference’s 30th Anniversary held in Vancouver recently, Boston-based Studio Echelman installed the world premiere of her most ambitious project to date, in collaboration with Google and the Burrard Arts Foundation: Skies Painted With Unnumbered Sparks (from Shakespeare’s Julius Caesar,) was three years in the making, more than double the usual size, weighing 3,500 pounds and suspended 745 feet over the waterfront between the 24-storey Fairmont Waterfront Hotel and the Vancouver Convention Centre. It was designed entirely from three types of colourful soft Honeywell Spectra fibres, a lightweight, durable material 15 times stronger than steel by weight then knotted by machine to withstand high winds, rain and severe sunlight. For the first time ever, the public was able to choreograph spectacular painterly lighting effects on the sculpture by logging to a special website on their mobile phones on site. This was produced in collaboration with Aaron Koblin, (he met Echelman at TED 2011,) Creative Director at Google Creative Lab.

Echelman arrived a week ahead of the opening of the 2014 Ted Conference to oversee her installation. Streets surrounding the waterfront were closed down beginning at 6:00 p.m. so that a team of local engineers with cranes could begin lifting and mounting the netting weighing 3,500 pounds and suspended 745 feet over the waterfront between the 24-storey Fairmont Waterfront Hotel and the Vancouver Convention Centre. Surprisingly, the gigantic aerial sculpture transported by truck, was packed into a 12-foot wooden crate, although sorting through the labyrinth of Honeywell Spectra fibres was a virtual Pandora’s box, taking all night and into the early morning hours to install. At one point a tree got tangled in the nets. ”Everyone asks me, but we’ve never had a problem with birds getting caught in the sculptures,” assures Echelman – they seem to instinctively know how to avoid the nets as the sculpture is moving in the wind.”

A scrupulous researcher and impassioned historian, Echelman has a romantic penchant for naming her sculptures after lines in literature, poetry, even environmental events. She used laboratory mapping data from NASA and NOAA to digitally design one of her sculptures based on the effects of the 2010 earthquake in Chile and ensuing tsunami after which the earth‘s day was shortened by 1.26 of a microsecond. Her sculpture entitled 1.26 , unveiled in Denver in 2010, has since been installed over Sydney, Australia, Amsterdam and recently, Singapore in 2014 – an astonishingly beautiful interpretation of an environmental catastrophe.

Named an Architectural Digest 2012 Innovator for “changing the very essence of urban spaces” Echelman was one of only eight chosen from around the globe for this honour.

Her next challenge is the permanent installation of The Impatient Optimist for the Bill and Melinda Gates Foundation in Seattle, later in 2014. “It will express their spirit and vision reaching out to their campuses all over the world, bringing people together and interacting with nature, which is ultimately my goal too,” affirms Echelman.

See the making of Skies Painted With Unnumbered Sparks: http://www.youtube.com/watch?v=npjTmG-TBHQ