Like pulsating exotic flowers, thousands of poisonous jellyfish whirl about in a silent dance; inquisitive penguins are as dapper as the nattily attired male guests, peering at each other through the glass and white belugas, ghostly apparitions, nonchalantly glide by cocktail dresses as colourful as a coral reef. 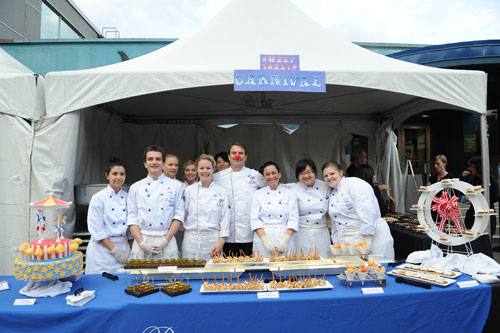 The Vancouver Aquarium’s annual Gala fundraiser was a splashy affair raising funds to support their conservation, education and research programs. It cleverly brought together 16 top chefs and restaurants, 22 wineries, distilleries and the public to celebrate Ocean Wise their empowering initiative that educates the consumer by addressing over-fishing and harvesting only sustainable species.

350 guests were willing aquarium castaways for an evening; strolling by a dolphin show, marveling at the shark dive and acrobatic performances while sampling and schmoozing at tantalizing Ocean Wise food stations, as marine life watched the humans dine.

Blue Water Café + Raw Bar challenged the palate (and courage) with jellyfish spring rolls – not the poisonous ones- I was assured by affable Executive Chef, Frank Pabst. “We bring them in from Taiwan where the fishermen think of them as pests. We take the caps off, marinate and salt them then add a squirt of Japanese dashi sauce and lemon verbena.” Stuffed with seaweed and topped with black and golden sesame seeds, they packed a tasty crunch!

“I try to do a lot of research before selecting my suppliers,” explains CinCin Ristorante + Bar’s Executive Chef, Andrew Richardson, “ to ensure that we are truly dealing with reputable sellers who are concerned not only about where fish are caught, but by what methods.” His wild B.C. spot prawn with avocado and grapefruit, along with Mission Hill’s Terrace Restaurant’s Quadra Island smoked scallop with hazelnuts and vanilla crème prepared by Chef Mathew Batey and The Fish Counter’s spot prawn taco created by Chef Rob Clark, were all VIP reception hits as was the champagne courtesy of Tattinger. 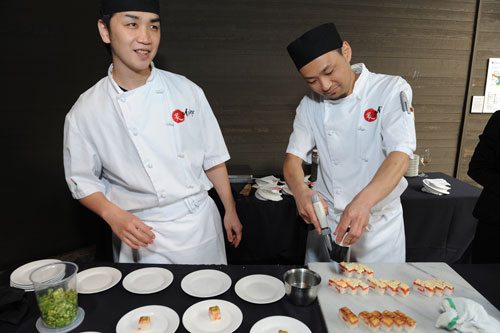 As sea otters floating on their backs cruised playfully behind them, Chefs Shinjii and Shingo from Miku Waterfront Restaurant created magic using a torch applied to a piece of Japanese bamboo charcoal to flame sear and flavour aburi salmon oshi sushi. It was prepared with local wild salmon then pressed and brushed with sweet soy topped with a secret Miku sauce and shaved jalapeno.

Bella Gelateria served up their award-winning hand-made gelato from their push cart while at another station, weakened by temptation by Daniel Le Chocolate Belge’s incredible caramels sprinkled with sea salt, I tried to stuff a few extra into my handbag (for conservation purposes, ) but I digress. The Pacific Institute of Culinary Arts chose to present a sweet table of carnival-themed treats fit for King Neptune. Created by their pastry students, miniature caramel pops, s’mores, mini donuts and cotton candy had the biggest lineups of the evening.

The exuberant Executive Chef Julian Bond (with red clown nose) has worked with the Vancouver Aquarium’s Ocean Wise program for years- in fact it’s a mandatory lecture presented to his students annually by the Aquarium. “ Just like recycling was to our generation, we need to get the students when they’re young, teach them about conservation until it’s just a natural way of life for them.”

Perusing the auction table of enticing silent & live auction items with the effervescent co-chair of Night At The Aquarium, Tina Rowntree, she points out the paintbrush donated by acclaimed Canadian modernist painter, Gordon Smith. Last year one of his paintbrushes was auctioned for $40,000! Other items ranged from a once-in-a-lifetime Antarctic Expedition donated by One Ocean Expeditions Inc., to Executive Chef, Chris Whittaker of Forage Restaurant, preparing a dinner for seven in the Aquarium’s Tropic Zone (the sharks will be so jealous) and spending a day with Canada’s Man In Motion, Rick Hansen, catching, tagging, and releasing great white sturgeon on the Fraser River.

Says Rowntree “Jack and Daisy, residing here, are the only harbour porpoises in an aquarium in North America. They were rescued due to support for our Marine Mammal Rescue Centre, and we are most grateful for that.”

Night At The Aquarium raised over $350,000 with 100% of proceeds going to the Vancouver Aquarium’s conservation initiatives.