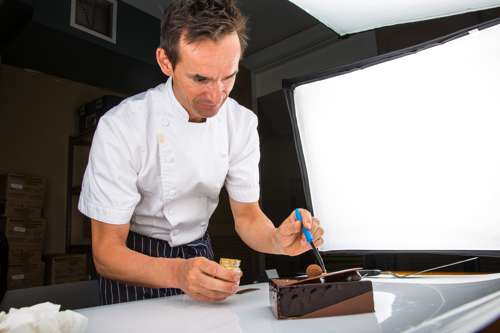 Thomas Haas is on the pinnacle of a mountain in the Italian Alps. Like a lithe performer in Cirque du Soleil, he’s balancing a pyramid of decadent pastries in one hand and with the other, gripping the handlebars of his Pinarello F8 road-racing bike.

In reality, this is a delightful caricature by an unknown artist, unobtrusively hung in a corner of Haas’ office at his North Vancouver flagship’s Thomas Haas Chocolates and Patisserie production kitchen and café. But it captures the essence of the man: his innate drive compels excellence in everything he does. Not only is he an avid cyclist but at 48, the down-to-earth Haas IS on top of the world – as an award-winning pâtissier and chocolatier. 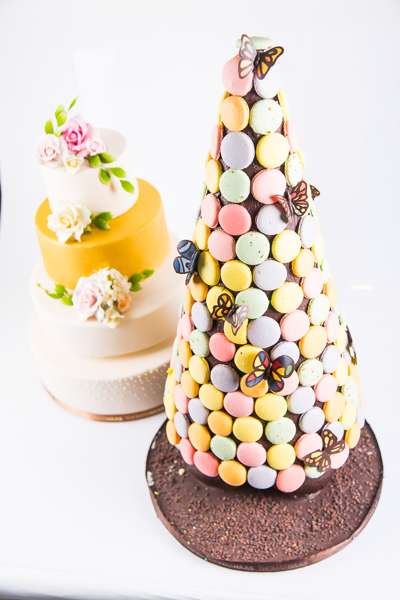 Humorous and self-deprecating, he tosses quips to staff in German-accented English as they go about baking or serving the 400-plus customers a day (800 on Saturdays,) that religiously lineup for his confections regardless of calorie count. There are no tantrums in his kitchen; mutual respect, laughter and hard work rule this roost.

“As a fourth-generation pâtissier, my great grandfather started Cafe Konditorei Haas, a grocery store -bakery in 1918 in Aichhalden the Black Forest region of Germany,” reminisces Haas.  “My grandfather expanded it into an artisan bakery business. Later, father morphed it into a 100-seat restaurant-café with a bakery nearby. Living above the bakery with two sisters, it was ingrained in my upbringing that I would keep the tradition, so I never questioned it,” he explains.

“My father made amazing cakes so my pastries have that German foundation that I refined from what I later learned. This kind of creativity you won’t find anywhere else.”

At the age of 16, Haas began the intensive training for Konditormeister, or Master Pastry Chef. “Apprenticing in Germany then getting my Masters Degree in pastry baking and business, which is mandatory, was all about work. I rarely came home.” 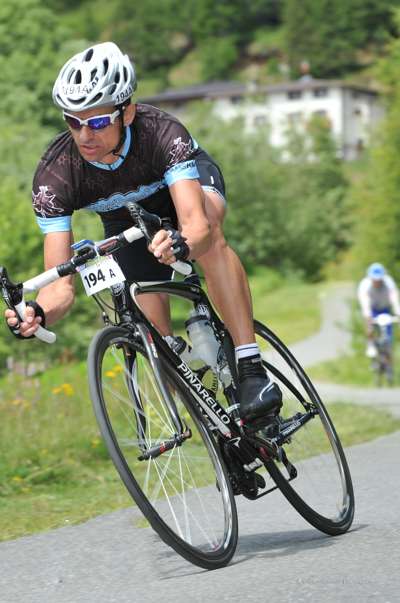 To many European adolescents, living in the U.S. is the icing on the proverbial cake and Haas was no exception. “As a young German kid of 23, I wanted to explore America so I sent my resumes to every good hotel from New York to San Francisco and didn’t get one response! I thought REALLY? With all my qualifications? I was so dumb then,” laughs Haas.

In the early 90s, Haas was working as the Executive Pastry Chef for a two-star Michelin restaurant in St. Moritz, Switzerland. During the St. Moritz Gourmet Festival, world class chefs are invited to cook for VIP clientele who pay 10,000 Swiss francs to travel by sleigh to eat dinner at a different hotel every night.

And this is when serendipity played her ace card. Haas was visited by a Four Seasons Hotel Chicago chef and their general manager. Their plan was to lure Haas to America.

“I was all set to go when the Four Seasons Hotel Toronto contacted me and said “‘we had you under contract to go to Chicago, but we had visa problems and we had another alternative. We’d still love for you to come to the company. Would you be interested in going to Vancouver?’” “’I said, sure, I’d love to. And then I thought, where is Vancouver? ’”

In 1995, then Executive Pastry Chef at the Four Seasons Hotel Vancouver, Haas met his wife, Lisa. She must have been his good luck charm because the accolades started to snowball: Twice he placed in the top-three in the prestigious annual North American Pastry Chef of the Year competition in New York City. This exposure attracted the interest of famous NY chef and restaurateur, Daniel Boulud, who asked Haas to help launch his flagship eatery, Daniel, in Manhattan’s Upper East Side.

During that stint in the Big Apple, Haas was singled out as one of the “Top Ten Pastry Chefs in America” by Chocolatier and Pastry Art and Design Magazines and saw his star further rise when he made several appearances with the diva herself on the Martha Stewart Living television show.

Haas and family returned to Vancouver crafting hand-made chocolates for Sen5es from the basement of their home, later for luxury hotels – even the White House became a client. Methodically building up to his life-long dream, he and Lisa opened the North Vancouver location in 2004 and his 1,400 sq-foot location on Broadway in 2009.

“You know, I want the business to be better – not bigger,” admits Haas. I could have 30 stores but I wouldn’t enjoy that. The important thing is for me to connect with the community here.”