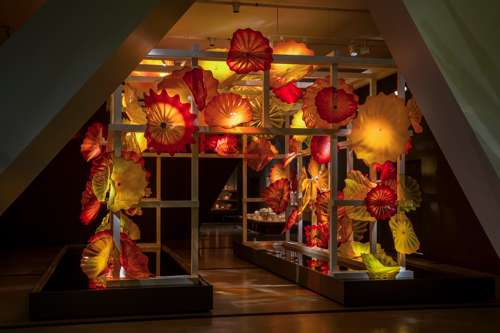 Persian Ceiling and Persian Trellis are designed by glass alchemist, Dale Chihuly, windows into his imagination and installed in a new Exhibition at the Royal Ontario Museum (ROM) in Toronto running until January 2, 2017. “I want people to be overwhelmed with light and colour in a way they’ve never experienced before,” says Chihuly, 75. “I’m obsessed with colour –never saw one I didn’t like,” he admits. 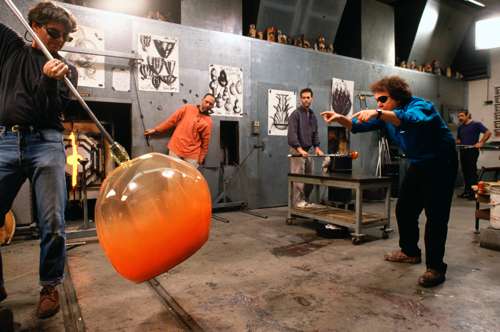 Shy in public, dramatic when working and always attired in a flamboyant colour, (he wore a lime green shirt, black suit and paint -spattered shoes to his Exhibition opening,) the Tacoma, Washington-born Chihuly is considered one of the foremost glass artists in the world, responsible for taking glassblowing into the avant-garde. His eye-patch may add to his persona but it’s not a deliberate affectation: a car accident in which he lost the sight in his left eye then later suffered a dislocated shoulder from a surfing accident, forced him to relinquish the blowpipe in 1979.

But that didn’t deter him.

Like a maestro conducting his symphony from his Seattle Boathouse hotshop, Chihuly becomes a performance artist choreographing the glassblower’s ‘dance’: wildly gesticulating, shouting directions like a sports coach – even encircling his arms around a glassblower from behind to coax the emerging glass, Chihuly is passionate about his craft. 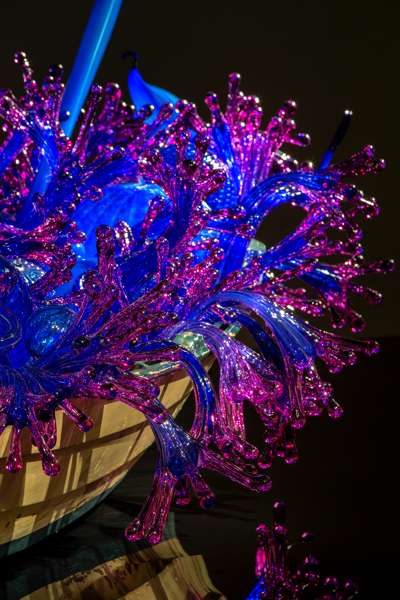 After receiving a Fulbright Fellowship, he worked at the Venini glass factory in Venice, observing the “team approach” to glassblowing and it’s that method he practices for all his projects. Chihuly co-founded Pilchuck School of Glass in 1971, fifty miles north of Seattle, attracting students from around the globe.

“I see myself as the equivalent of a film director,” he explains. “You can make a film by yourself, but it’s a lot easier if you have a cameraman, lighting person, scriptwriter, etc. (The team) enables me to work in a much larger scale and really push the material to the limit … Glassblowing is a very spontaneous, fast medium, and you have to respond very quickly.”

Some of Chihuly’s boyhood memories living in the Pacific Northwest recall his collection of glass marbles, gathering beach glass on the shore and his mother’s vibrant flower garden. “I’m always drawn to water,” he confides.

His symbiotic relationship with nature is at its most powerful and prolific when he is designing like a painter en plein air. It’s astounding to see him throwing torpedoes of his trademark herringbone-patterned glass from a bridge into a river in Finland; gigantic striped glass “onions” into the Venice Canal or hanging a shimmering glass icicle chandelier designed to endure 100- mile-an- hour winds, on a granite outcropping in the Cascade Mountains. “ It survived the winter without one of its 1,000 pieces breaking!” he grins proudly in a video of the installation. 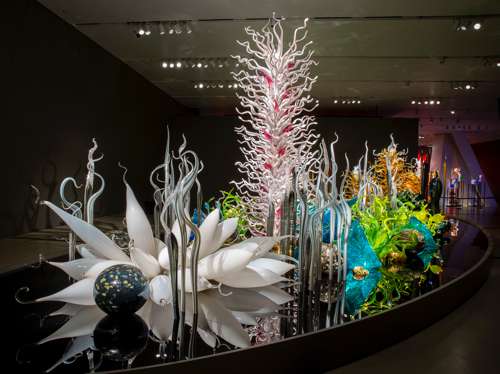 His great affinity with Israel after living on Kibbutz Lahav in the Negev Desert for a year (Chihuly is not Jewish,) had a profound affect on him: “I arrived as a boy of twenty-one and left as a man, he confides.” In 2000, Chihuly in the Light of Jerusalem was created for the Citadel Tower of David Museum near the ancient Jaffa Gate. He transported 40 enormous blocks of transparent ice from Alaska to form a wall. Chihuly said the illuminated melting wall represented the “dissolution of barriers between people.” Soaring sculptures and cylindrical forms fused with radiant glass crystals, echoed the ancient stones laid by King Herod.

For his 2016 ROM Exhibition, Chihuly’s personal collection of woven baskets and blankets by Pacific Northwest Coast indigenous people have been re-interpreted into intricately patterned glass.

“I work from my gut. I don’t know what it is until it’s finished. Call it chance, call it fate, I want to make something that has never been made before – something no one has ever seen. Something with power that inspires everyone who sees it.”